The Distributive Education Clubs of America (also referred to as DECA) is a nonprofit organization that prepares hopeful leaders and entrepreneurs for futures in various branches of business in the future. DECA is a respected and popular program around the world and the LHS community as a whole. Annually, there is an election that occurs that is used to determine important roles within different candidates. However, due to virtual learning, this election has taken place virtually, leaving many to question who emerged as the winners of this election.
Typically, there is an election process that is held annually in order to determine the officers of DECA for Leonia. This process involves hopeful candidates (only senior students are eligible) to create different campaigns to win over the votes of various students. Candidates run for the roles of President, Vice President, and Secretaries. This year, the election for this process was slightly different. Instead of taking place in person, candidates developed campaign videos for voters to go over. Afterwards, students voted for their favorite candidates for the different roles that were open.

Although some were opposed to the idea of having a vote virtually, many students have revealed that they actually did not mind this voting process. This idea can be pointed towards various students such as freshman Joshua Jang. He says, “The DECA election was very interesting because I got to choose the people I wanted”. When asked how he determined which candidates he specifically favored, he replied with “Some of the people had enthusiastic tones, which is essentially the people I chose”. This demonstrates how few may have actually liked this way of voting over a Google Classroom vote instead of one that is in-person and more difficult to choose from various options.

During this phase, there were multiple candidates that applied for the roles of President, Vice President, and Secretaries. After voters watched the campaign videos for all of these candidates, they submitted their votes for the candidates that they thought would lead the DECA team the best. There were many different topics addressed throughout the campaign videos such as how the candidate would make the DECA program at LHS better, the great qualities that these people possess, and their overall vision/reason for applying to be an officer. An example of an idea present in a video is Ryan Ko’s application for Vice President in which he said, “I want to help you guys enjoy your time here at DECA”.

All in all, the DECA voting process for the 2020-2021 school year at LHS has been a unique and interesting experience for both candidates and voters alike. Although our community has had to adapt, the design and overall aspect of the voting process has been absorbing. 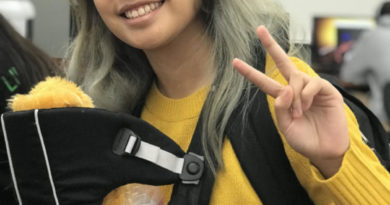 It’s 3 PM, Do you Know Where Your Flour Baby is?