Being a new student is difficult, and the last thing any of them want is to feel unwelcome. Being a  new student myself, It could be useful to interview another new student, and compare our experiences, and our old schools.

I interviewed a new Junior, Lauren Gibson. Lauren moved from the Princeton area to Edgewater right at the start of school. The two of us agreed that being a new student is weird, but it is nothing like what you might expect from watching, say, a high school movie.

One of the first things that Lauren and I talked about was the general atmosphere of the population of the school. “[Leonia] is smaller than my other [school], but that wasn’t a bad thing, because it’s easier to get to know people,” she responded. “The kids that I first met were very nice, and pretty outgoing, and welcoming,” which we both decided was a good thing. It’s hard to come into a new environment and not know anybody. The open attitude of the student body made the transition so much easier.

Next we talked about the teachers. “The teachers were really nice, and better than my other school because a lot of them can actually teach [at Leonia]” I had to agree with that one. We feel that, as a whole, the teachers at Leonia are very good at what they do, and actually give the students responsibility and trust, which is unlike any school either of us had been to.

As we came to the end of our interview, I asked Lauren to help me come up with a sort of dos and don’ts list, one that could help the student body help the new students get more acclimated.

Dos and Don’ts When Talking to a New Student: 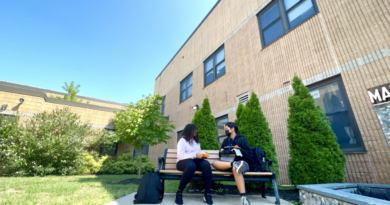 ‘Tis the Season… to Visit Colleges