As the school year begins and Covid is still surviving, families all over these two towns are filled with many questions, a common one being if fall sports would reopen, well guess what? They finally have. After what felt like a battle, the students achieved victory and claimed the reward of the reopening of Fall Sports.

The students were able to take back the LHS fall sports all on their own. It started off with a petition for over 100 signatures to give to the superintendent. In just a couple weeks, the petition was completed and a board meeting was held. At the meeting, the people of the school district declared the verdict of “yes”, making the sports be reinstated immediately.

Even though most people are pumped for the new fall sport seasons, others are afraid to go back  because of how difficult it would be and how different it would be. According to Siena De Leon, a freshman here at LHS, she says that even though she is all about fall sports, she is worried about her mom not allowing her. There is definitely a debate between fall sports or not, really between students and parents, which could result in the termination of the fall sports at LHS.

Compared to last Fall, sports are completely different due to the Coronavirus, with multiple sports being almost unplayable. Sports like soccer and cross country are just a few to name that would be extremely hard to play because of the constant heavy breathing and sweat, making people almost suffocate because of the mask. While sports like tennis would be easier because it doesn’t require as much exercise as other sports. One common thing throughout all the different sports is the mask, no matter what the masks have to stay, but that isn’t stopping our teams, they only care about staying on the field and participating in the sport to the best of their ability.

September 29, 2020 Ivonna Smoljan Comments Off on For the Freshman 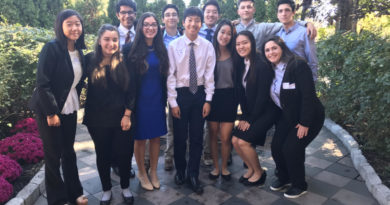