The new lion statue outside the main entrance to the Leonia High School came as a surprise to all the students of the school as one regular morning turned into excitement and school spirit. The statue was planned for last year but, it wasn’t until this school year that it actually happened. The high school has adapted very well to the statue and has embraced it. As all members of the Leonia school district know, our school mascot is the lion. A lion is the head of the jungle, or the leader of a pack and students in the school act like it. Whenever there is a big school event, students from all grades come out and show their support. This year during a game against Ridgefield, the gym was packed with students from the school and even teachers showed up to support the team. Although this was before the lion was put in place, it still shows the school spirit students had.

As the school year progresses, students will take more and more pride in the statue and school spirit. It is important that we appreciate our school and the people around us during those hours. In an interview with Johnathan Chacon, the Leonia student talks about how the lion represents more than just pride and spirit, he says that the lion represents a “brotherhood” and a sense of “companionship.” Anybody that attends a Leonia school is a part of the lion pride. “Give respect to get respect” is the motto around the high school and it is taken seriously. Respect is given and received throughout the whole school and this is what makes the environment so great. In another interview with fellow student Joshua Lee, the student talks about the environment within the halls of the school. “Everybody is friendly to each other and people treat each other the way they would like to be treated.” Lion pride and spirit pays great contribution to this. The lion statue just adds to it. Leonia is family. 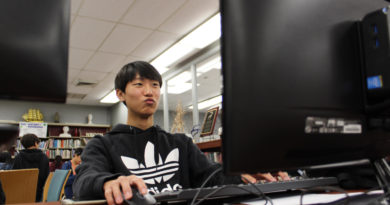