Before arriving at a proper feeding area you may stumble upon a sign that says ‘do not feed the birds’. This sign is to be respected even if it does go against everything a bird feeder stands for. The glimpse of it may call into question the validity of the practice. Why on Earth am I feeding the birds anyway? You may ask. There is no universal answer to this query, but in order to grasp a semblance of reason I gathered two professionals.

Mishelle Goykhberg cannot recall when she started feeding the birds but she’s been doing it for long enough to appreciate the little things. “It’s a romanticized action. I don’t put a lot of thought into it.” She throws food items with an experienced toss of the arm and watches the members of the aves class descend upon the meal. “The birds don’t say thank you which is kind of rude.”

Mishelle’s nonchalance towards the activity is proof of its relaxation and illustrates how being too caught up in the why will make you feel unsatisfied. Dr. Keith Massey agrees, saying “It’s enjoyable, though I prefer feeding on birds.” He enjoys analyzing the characteristics of the birds he feeds; often noticing their traits as they “eat anything without really thinking about what people are throwing at them.”

From his teachings I have myself analyzed the traits of the birds you tend to find around the Leonia/Edgewater area. By trees there are usually little brown birds. They’ll get to the food quickly but might not be strong enough to lift it if it’s too heavy. You’ll want to give it to them in bits. After a while, a seagull might spot you throwing and if it does then the rest of its flock will follow.

Seagulls terrify little brown birds so they’ll retreat back to the tree. Juxtaposed to the calm little birds, seagulls are horrid. They’ll fight one another on ground and sky for anything you throw. Some think they’re cool and will caw at the others to proclaim their dominance. In many cases there are much bigger seagulls around the loud ones who are more likely to get the food. They are the most modest of the seagulls and will wait their turn instead of dashing into the frenzy.

There also pigeons that are a bit dull and will foolishly walk close to humans unlike the seagulls. In rare cases, they may even  fly up on your arm. They are my favorite to watch and they have the prettiest sound. Geese are neat as well. They walk in groups and in single file lines; never flying towards food. In an almost regal fashion they stroll up to the other birds to see what’s going on. The enjoyment of bird feeding truly comes in the satisfaction of being able to distinguish the separate lives of members of the same species. The serenity of the activity is relaxing in an almost meditative manner and never fails to liven up someone’s day.

December 13, 2019 Maya Kanovsky Comments Off on The Joker: Worth the Watch? 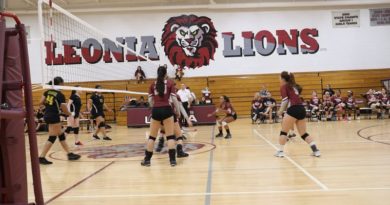 How Sports Funding is Determined at Leonia High School

March 20, 2019 Eunhye Grace Cho Comments Off on How Sports Funding is Determined at Leonia High School