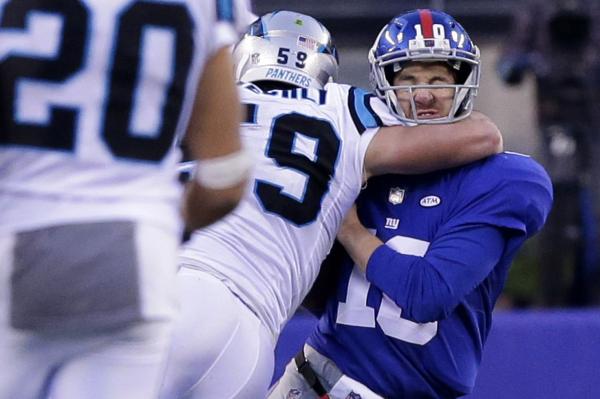 From the start of the game, the Falcons dominated every snap. Matt Ryan was playing the best football of his career and their defense looked superior. Robert Alford brought back an interception in the 2nd quarter for a touchdown to make the game 21-0. This is where it all went downhill. The Patriots began playing well while the Falcons started to look like a 0-16 team. This early lead quickly subsided and Tom Brady eventually led his team to a 34-28 overtime victory. In the 4th quarter with a lead, the Falcons had a 99.7% chance of winning based on ESPN’s win probability machine. This was the biggest upset in 2017 as the Patriots defied the odds and pulled through to win Tom Brady’s 5

It has been a rough year for New York football fans as the expectations coming into the season were high and there has been nothing to show for it. With the acquisitions of CB Janoris Jenkins and WR Brandon Marshall, it seemed as though the Giants added pieces that would solidify both their offense and defense. However, with Ben Macadoo suspending defensive players to make a statement and numerous injuries on the offense, New York has not been the same team it was a year ago. As the weeks go by, the Giants continue to disappoint. They started out losing their first 5 games and their coaching staff has just benched Eli Manning. The fans are not happy at all and it is easy to see why.

This year, Florida State was expected to be a contender for the national championship in college football. The preseason ranked #3 team in the country has lost games to Alabama, NC State, Miami, Louisville, Boston College, and Clemson. Despite projections of possibly being undefeated, Florida State did not live up to their expectations and finished the year at an unranked 6-6.

The Dodgers appeared to be the best team in baseball after the marked a win-streak of 20 games. However, they let their fans down extremely as the end of this win-streak led to a losing streak of 19 straight games. No one could have expected this of the team with the best record in the MLB last year.

Xavier did not have high expectations going into March Madness. However, they ended up upsetting #5 Maryland in round one, #3 Florida State in round two, and #2 Arizona in the third round.