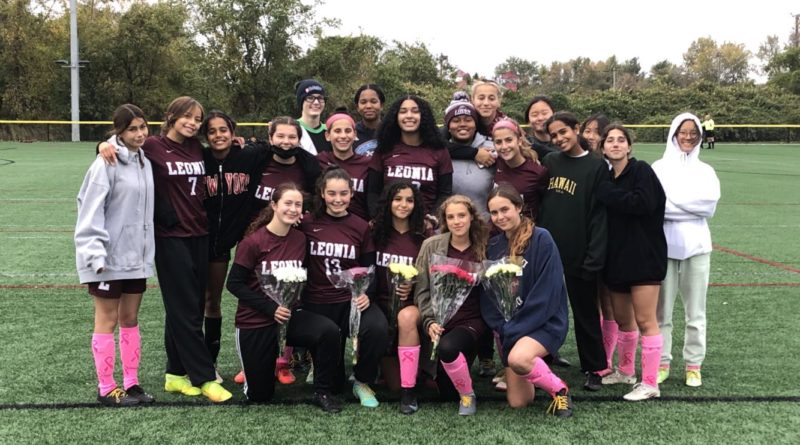 In Leonia, the school and town community tends to pride itself not only on academic success, but also on the success of their athletes. Usually, credit is awarded primarily to the Women’s Varsity Tennis team, the Swimming Team, and the Bowling Team. Yet this year, it’s time to add another team to the list.

This year, the Women’s Varsity soccer team has made history. Led by captains Olivia Grandelis, Lily DeFilippis, Liah Jimenez, and Hannah Jacobowitz, the team has been at full strength.

In 2020, with a complete absence of Seniors, the team didn’t lose anyone to graduation, making it easier for the girls to connect with each other and play together in the 2021 season. Ruby DeFilippis, the team’s Sophomore goalie, said she felt the same about last year and this year, yet closer because of all the “difficulties of last season.” She felt that everything that happened last year, with all the changes from the pandemic, ended up being a way for the team to relate to each other.

According to Senior captain Olivia Grandelis, the new season “brought [the team] closer together”, stating that the team has “a lot of potential to have a winning season.”

As an indication of their success, they changed the odds against New Milford on September 22 of 2020. Historically, New Milford has beaten the Women’s Varsity team each year. To increase this rivalry, the opposing coach was the brother of one of Leonia’s three soccer coaches. For 17 years, Leonia couldn’t come out on top. They’d lose by landslides.

In 2020, things began to change when a goal was scored against New Milford by then Freshman Tavi Unnithan. In that game, Leonia lost only by 2 goals instead of the usual landslide. It seemed like a small victory to celebrate, but as the ball crossed the goal line, the team crossed over an important threshold, the results of which were seen in 2021 as Leonia won its first victory in 17 years against New Milford, with a score of 5-1.

All 5 goals were scored by the Unnithan sisters, Sophomores Roshni and Tavi. Tavi scored 3 goals in the first half, with Roshni scoring 1 before the end of the half. In the second half, Roshni had yet another goal to secure a Leonia victory. Sophomores Lola Fernadez, Samina Trimarchi, and Seohui Jeong assisted the goals of the game. Leonia had a total of 15 shots on goal, whereas New Milford had 13. Both goalkeepers, Ruby DeFilippis and Madison Strover, played in the game. Ruby DeFilippis had a total of 8 saves, with Madison Strover saving 3.

Winning a total of five games in the early season, Leonia’s victory against New Milford lifted the spirits of the players and coaches. As per tradition, the parents of head coach, Endre Krajcsovics, attended the game, and witnessed the historic win.

In their first game of the season against Harrison, 2 goals were scored by Tavi, 2 by Lola, 2 by Isabella Ro, and 1 each for Hannah Jacobowitz and Samina. Olivia Grandelis said that this game was her favorite part of the season because it was her “last time playing them on our home field.” To her, “It was a great way to start the season.”

Their victory with New Milford came during their fourth game into the 2021 season. Their sixth game, against Ridgefield, saw a hat trick for Junior Hannah, and 3 goals each for Seniors Olivia Grandelis and Lily DeFilippis, and Sophomore Tavi  Unnithan.

A recent game, their last time playing Harrison, saw a 7-2 victory, with two hat tricks by Hannah and Tavi. The final goal was scored by Samina.

On October 18th, the girls beat New Milford yet again. The win came during overtime with the “golden goal” rule, as Tavi scored only 4 minutes into the 10 minute overtime.

As the season continues, the girls are beginning to think and reflect. Losing 5 Seniors this year, they’re realizing how much has changed since they first started playing together. Ruby DeFilippis mentioned how this year is different from the previous one because of the absence of the mask mandate in sports. She said that the last year was “stressful” and highlighted the “discomfort” that came with wearing the mandated mask.

To add to Ruby’s point, Junior Liah Jimenez said that this new season made her “value the team and its qualities” and made her thankful to “even have a soccer season” in the 2021 year.

Although approaching the halfway mark of the season, there is still much of the season left, and much to look forward to. Their Senior Night, set for a match against Butler on the 29th of October, quickly approaches. A final home game for the girls, they encourage the support of their fellow Leonians, and hope that future Lady Lions will reach out! December 7, 2020 Ivonna Smoljan Comments Off on Let’s Save the Arctic