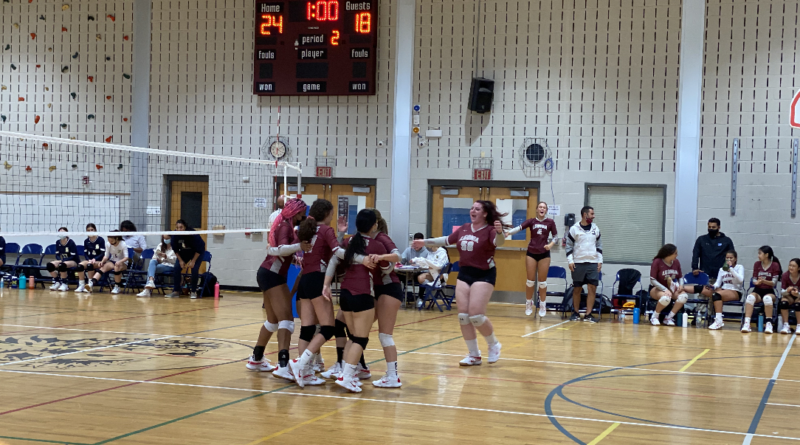 Since the outbreak of the COVID-19 virus and Hurricane Ida, the Leonia Lions volleyball team has had to undergo major adjustments in the way they play. This is the volleyball team’s second season playing since the initial lockdown order in March of 2020. As of this fall season, the team has won six of the eight games that they have competed in.

Last year, their first season playing under COVID-19 guidelines, athletes were required to compete and practice with masks and needed to maintain social distance. This year, masks are optional for vaccinated players, and players no longer need to take social distancing precautions amongst themselves. Sofia Arzeno, a volleyball player on Leonia’s varsity team says, “It’s much better this year because we don’t have the restriction of masks, we had to practice and play in masks last year and it was hard”.  The athletes last season were very restricted and the change in regulations have been in favor of the players.

Right before the start of the 2021-2022 school year, there was an unexpected hurricane that hit Leonia and left the high school with severe damage. The flooring for the entire first floor of the high school was devastated and needed to be replaced. This includes the school’s gymnasium, where the Volleyball Team’s practice space was located. As a result, the Varsity and Junior Varsity teams have had to relocate to the town’s middle school gym. Their equipment was not quite up to par with the high schools, however. Arzeno says, “we have to adapt to their limited equipment. We had to learn to share”. The team has had to make unexpected adjustments due to the damages of the hurricane.

Abigail Boyd, a Leonia High School Junior, and a star player of the varsity volleyball team, says, “We started off a little uncomfortable last year, we didn’t know each other since we had been virtual for most of our high school career. We didn’t know each other well enough or spend enough time together to be super comfortable last season, but we started to gel well together this year”. The players seem to be closer this season than last.

Arzeno agrees that the players last year were more distant. She says, “We definitely weren’t as close with each other, like we had to keep our distance and we couldn’t do team bonding”. Recent circumstances had caused many physical changes for the team, but had also caused emotional disconnect between players. Despite their hardships last year, this year has given them the opportunity to build up their relationships to be stronger than ever.

It is no secret that last year’s season was not ideal, due to COVID-19 adjustments. Many players have been anticipating this season, in hopes that it would be a little less restricted. So, has this season lived up to the players’ anticipation? Arzeno says, “I expected things to get back to normal, and it kind of has. Spectators are allowed back in the gym, and we don’t have to take as many precautions. Our team is getting back to normal.”

Boyd says, “We’ve had to adapt to it quickly, I feel like it was poured on top of us at once. But we’re grateful that we can still do it”.  Although things are finally moving out of the atypical year-long cycle we have been stuck in, going from being at home for a year to keeping up with a demanding schedule has been a big transition for some players.

The Trial of The Chicago 7 – A Review

February 28, 2022 Lilian DeFilippis Comments Off on The Trial of The Chicago 7 – A Review

Do You Have a Self Care Journal?

February 27, 2021 Ivonna Smoljan Comments Off on Do You Have a Self Care Journal?