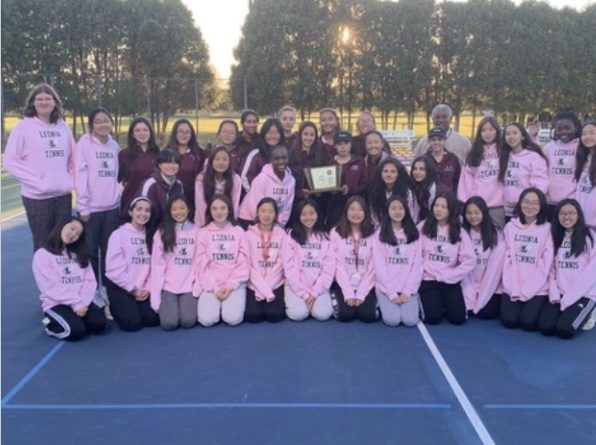 From the beginning of August when preseason began to the very end of October, everyone could recognize that this year granted Leonia High School an extremely special varsity girls tennis team. The ultimate proof of this was shown when Esther Gim, Eujin Choi, Lily Futeran, Gloria Park, Arya Ramalingam, Maya Naik, and Reana Radu played in the starting lineup to win Leonia the state finals, making our team sixth in the state of New Jersey.

Although the junior varsity team is not traditionally brought to the state championship matches, this year every member was invited to watch at the massive courts at Mercer County Park in West Windsor Township, New Jersey. Walking in to see girls on twenty different courts was quite intimidating, but the starting lineup handled the pressure extremely well.

The day was filled with watching various tennis matches, both singles and doubles. In the first round of the tournament, Leonia played a match against New Providence and defeated them with a score of 4-1. It was tense, as this match determined our placement in the finals. However, all of the singles–Rea Radu, Arya Ramalingam, and Maya Naik–were victorious in addition to the first doubles team of Eujin Choi and senior Esther Gim.

Later on in the day, the starting lineup suited up to play Glen Rock, one of Leonia’s toughest competitors. The match was extremely intense, and one of the longest ones our team has had all season. All of singles was able to defeat their opponents with close scores, leading us to a win at 3-2!

The moment first singles player Arya Ramalingam hit the final shot to win our team the state finals, everyone ran on the court, hugged her, and cried–just like our coach Mr. Cullen told us would happen. After such an amazing season, it was the perfect way to end it.

Senior Morgan Suh said about the event, “We put in so much more work, and the team was really united this year,” proving that this was a very rewarding moment for her especially, as a senior varsity player. After all, the last state championship Leonia won was in 2002, and ever since then, each varsity team has been steadily working toward another one.

The team’s coach Mr. Cullen was obviously thrilled about the accomplishment. Although Cullen has given many words of wisdom over his years of both coaching and teaching, what resonated with the varsity team the most was when he said, “Look at the walls of this school. You’ll never see me in any of the team pictures. This is all about the team, not the coaches.”

Overall, it was a tremendous honor to play in the state finals, as Leonia was one of only three teams from Bergen County to make it there. Although winning the tournament was the best way to close the season, it was still a bittersweet moment for everyone involved.

As seniors leave and new members join the LHS girls tennis team, we’ll always reflect on this season in particular. With an astounding record of 24-1, this Lady Lions varsity team will go down in history as one of the best groups of girls to play tennis in New Jersey.

October 2, 2015 Michelle Kang Comments Off on Rebuilding the Band 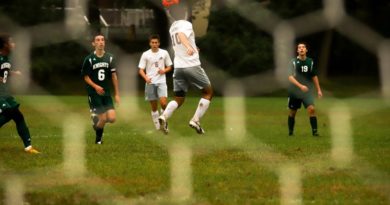