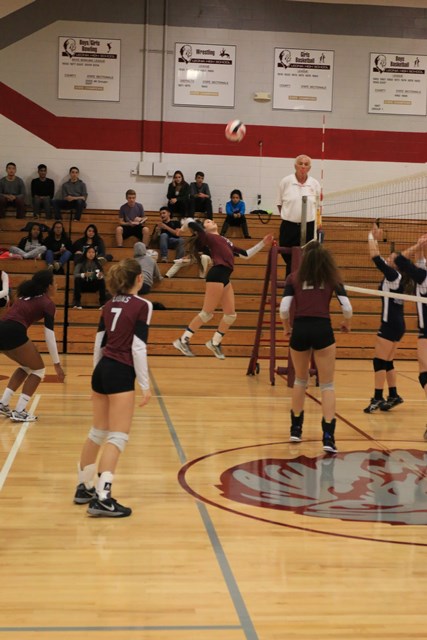 The Leonia volleyball team won their first state sectional championship ever. The game was definitely thrilling to watch. The opposing team was Rutherford and they were known to be a very good team. Rutherford had a star player named Jessica Rogers who everyone talked about and the reports on her were true, she was an excellent player and had a killer spike. Although she was a very good player she basically carried the team and no other player was nearly as good as she was. Before the game Leonia had a pep rally for the first time in a couple of years dedicated to the volleyball team. The school was rallied up and the amount of support for the volleyball team was amazing. Rutherford somehow found out that before the game we were going to have a pep rally and tweeted, “ Make sure you arrive to the gym right after school and fill up the stands so Leonia has nowhere to sit.” Rutherford was definitely trying to start something with Leonia, but the Leonia fans stayed composed and waited for the game to chant their cheers.

Rutherford was packed with their fans that took up half the gym. They only left a small quarter of the bleachers for Leonia but Leonia still made due and were crazier than ever. The Rutherford fans were very rowdy and were rather rude to the Leonia fans and players, but it didn’t really affect the players, instead it motivated them. The game started off very competitively and has the Leonia and Rutherford players were battling so were the fans. The rush was insane and Leonia ended up winning the first game. The second game on the other hand was very suspenseful because both teams were rallying back and forth. Rutherford ended up winning the second game by two points. The Lady Lions were exhausted yet had a fire inside of them that wanted to win. Near the end of the third game the score was 24-23 Leonia and Gabi Capote hit the ball from the back row and made a passer from Rutherford overpass and Maxine Walsh immediately put the ball away for the win. The fans went crazy and everyone rushed on to the court to hug and celebrate the win with the lady lions. It was truly a sight to see.

After the tremendous win of the state sectionals the lady lions advanced to the state championship finals which took place at the college, William Paterson. It was the first time the Leonia volleyball team has ever made it to the finals in Leonia history. The team was up against Bogota which were known to be an amazing team and they were. The gym was huge and the bleachers were a hundred feet high. Right before the volleyball team went to warm up the Leonia fans came in and brought “the noise” about a hundred fans showed up in school attire and Leonia pride. Almost the entire population of Leonia was at the game because everyone knew that it was a once in a lifetime thing for Leonia. The game started and Leonia started off really strong. The game was intense and Leonia was putting up an incredible fight. The officials that were there were saying that the first game was the best game of the day. The game was very close and sadly Leonia ended up losing the first game by two points. The second game was very tough for Leonia because they were trying to gather their strength and Bogota was even more fired up because they won the first game. Bogota ended up winning the second game and the championship title but Leonia never gave up the fight and lost with pride. The lady lions had an outstanding season, they won were undefeated in league play, they won the league titleship and they won the state sectional titleship. The Lady lions fought hard until the very end and accomplished all of their goals. They brought back school spirit, pride and the unity of our school.