This year, the Leonia High School’s drama club, Limelighters, will perform Game of Tiaras. The comedic tragedy utilizes Disney characters to present a hybrid of Game of Thrones and Shakespeare’s King Lear.

The main characters include a king (like Lear) and his three daughters: the eldest, Cinderella, the middle sister, the Snow Queen, who in-no-way-resembles-a-trademarked-character, and the youngest, Belle. The King decides that he is too old and wishes to abdicate the throne by splitting the land between his three daughters, like in King Lear. Cinderella, however, is nothing like her fairy tale counterpart. In Game of Tiaras, she abandons her benign personality for one that is erratic and power-obsessed. The Snow Queen, who is called Ellie in Game of Tiaras, emphasizes her independence by ruling without a king and flaunting her unnatural magical powers. Belle, additionally, deviates from her intellectual character and becomes more ditsy.

When watching the play, the audience often only concentrates on the actors and forget about the people working backstage, the stage crew. This year’s stage managers, seniors Albert Chung and Rex Kang, are in charge of guiding the stage crew, independent of the director. Although the stage crew graduated many valuable members last year, the two stage managers are content with the new freshmen. Rex stated that they are still “getting used to high school life. They’re still too dependent on upperclassman, but it’s okay. They’ll grow.” Albert added on that they are “learning while having fun as they joke around with their friends.”

Although stage crew is not part of the plot, Albert and Rex know enough to give their opinions on Game of Tiaras. Albert said, “Because it’s a comedy, it’
ll appeal to a lot of people. Everyone who comes to the show will enjoy it a lot.” Rex believed that the play had a “good twist to Game of Thrones” and would appeal to children in particular because it utilizes Disney princesses.

Game of Tiaras includes many references from popular media, which will appeal to many different people. The plot, although a tragedy, is very funny. As Albert said, everyone who comes will have a great time. 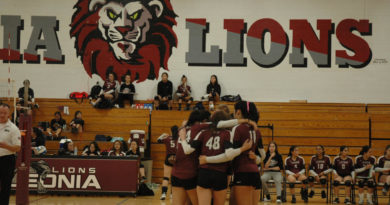